Popsicles, Kickball and SO MUCH MORE!

Last night was surely a memory maker for my son Marc and many other kids.  It was a beautiful summer night, perfect for a spirited game of kickball and rocket pops, and laughter.  When I picked Marc up I could tell he had a blast, only to be confirmed by the sweat and dirt all over his face, the bruises on his knees, and the smile on his face.  He told me all about the kickball game and how excited he was to catch up with his old friends from school and hear about their summers.  Then he said to me, “Ms. Lalli does so much for other people.”

So who is this Ms. Lalli?  Well, if you are one of my Cotswold friends you certainly know who Ms. Lalli is.  But for those of you who don’t, I will take a minute to fill you in.  Ms. Lalli is a gatherer of the most amazing kind.  Ms. Lalli was Marc’s fourth grade teacher.  Each morning of school she gathered together her students and poured into them so much love, and kindness, and compassion, and yes, math and english too.  It was a special year for Marc and every student in her class.  Ms. Lalli has the ability to make every student feel cared for and valued.  She’s that teacher that my son will look back on and always remember, not for the things she taught him, but for the way she made him feel.

Last night was the icing on the cake.  Ms. Lalli organized a class reunion.  A game of kickball on the school blacktop.  So simple!  So special!  Every kid there showed up smiling from ear to ear.  The kids immediately started playing and talking.  You can tell they are getting older as the girls and boys quickly said their hello’s and then split into groups, talking about summer vacations and back to school shopping.  The separation didn’t last long however, as the epic kickball game was played by all.  By the time I returned to pick up Marc, kickball had turned into basketball and a little bribing was necessary to pull our kids away.

This morning I think back to what Marc said, “Ms. Lalli does so much for other people.”  Marc, at the age of 10, already knows how special it is for someone to give you the gift of their time.  That’s one of the biggest elements of gathering.  It’s time!  In a world where being busy is so valued, time is a precious commodity.  People will often open their wallets before they will open their doors because it is easier.  But TIME, wow, time is special!  It is limited and scheduled and you can’t get it back.  Time allows for community, and laughter and memory making.  Ms. Lalli understands the value of investing her time into her students and I am so grateful for that investment.  I see my son growing exponentially both in smarts and character as a result of the time Ms. Lalli gave him. It is a priceless gift!

Last night was truly magical.  Summer heat, popsicles, kickball, blacktop and a bunch of sweaty kids who know they are loved! 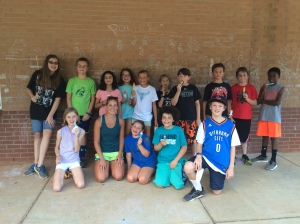